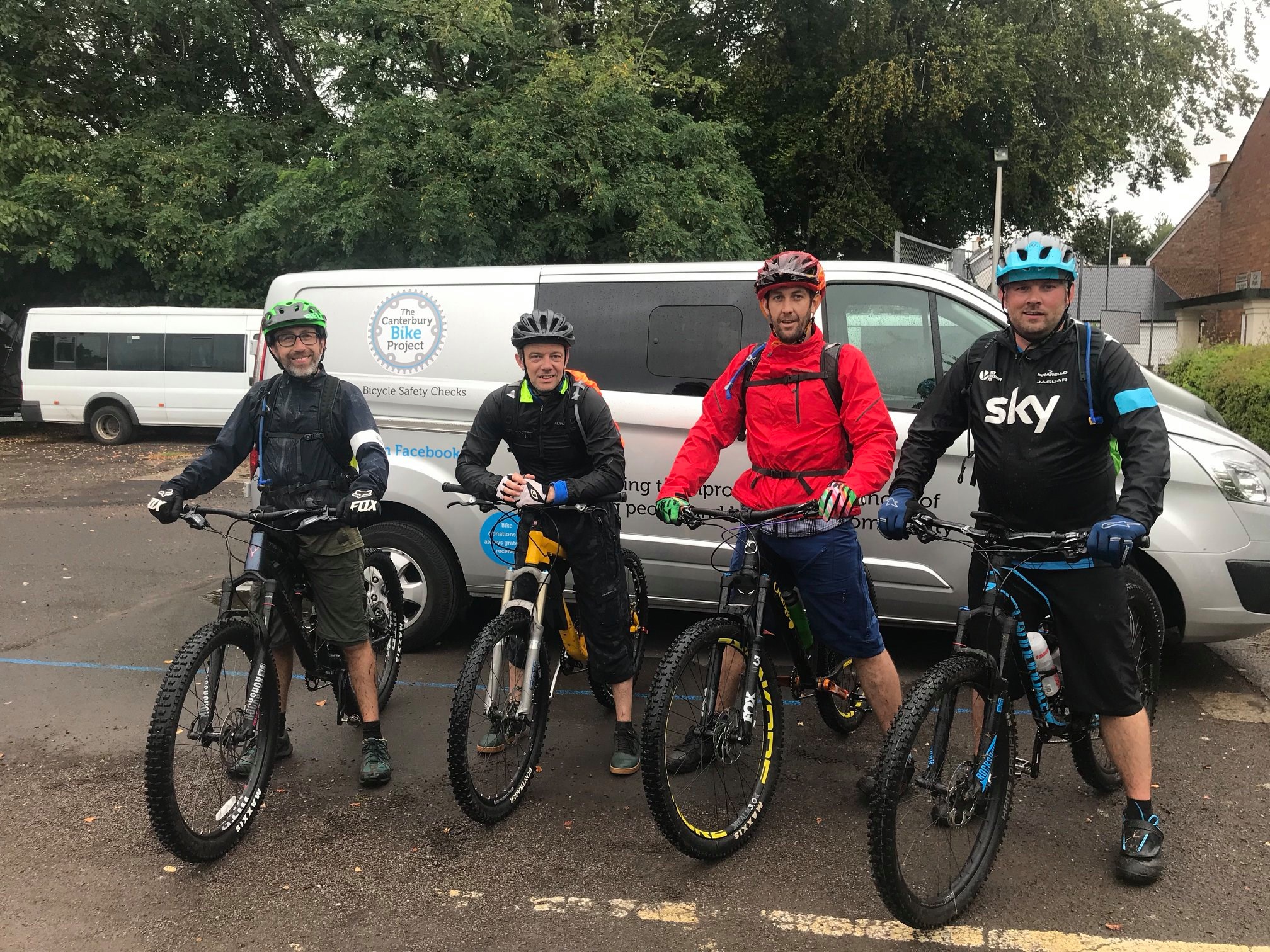 Like a bunch of school kids packed into the school bus heading away on a school trip, away from their parents for the first time, nervously excited of what the next two days would bring. That’s how the male contingent of the Canterbury Bike Project team felt as they crossed the Severn bridge into Wales on route to an intensive two day training session with Windy of WyeMTB who would be preparing us for our British Cycling Ride Leadership Level 2 award.

To be able to engage more of the local community and support individuals in their riding development we as a team want to take small groups out on organised local rides. To do this professionally, safely, and with all the necessary insurances and approvals we needed to complete training, and assessment in line with British Cycling Ride Leadership courses. The Level 2 course gives any ride leader the skills to safely take a team of up to 8 riders out on a planned off-road semi remote route. That means MTB fun to you and I.

Arriving late at our hotel, we all couldn’t sleep with excitement so kept the bar tender company until he closed the bar.  The following morning a healthy breakfast was had knowing we had quite a few miles of riding ahead of us.

With the nerves rising, we met Windy – nothing to do with the beer or the breakfast, but Dave Windebank from WyeMTB. Top bloke! We were soon chatting about bikes (obviously) and sharing war stories.  The morning consisted of a classroom session, cementing the feeling that we were kids back at school withnervous excitement.  The British Cycling Ride Leadership Award enables those qualified to lead rides in more remote environments and over longer and more challenging terrain. The award qualifies leaders to deliver guided bike rides safely for groups of intermediate and advanced level adults. Throughout the morning we covered topics such as planning and delivery of rides, leading techniques for effective group management, map reading and navigation, management of accidents and emergencies, equipment set-up, trailside repairs and core mountain bike techniques, decision making and advanced risk management.

Then there was the ‘practical’ element, which included a timed ‘test’ to see how quickly we could remove a wheel, remove the inner tube, swing it around our heads, and then re-assemble.  With Steve doing this activity many times daily at the bike project (replacing inner tubes, not swinging them round his head) he won, obviously.

After a spot of lunch, and yet more stories of the biking kind, and appreciation for the mechanical offerings to the biking gods that we had brought along for the weekend (our bikes…), we headed out for a ‘quick’ afternoon ride. To be fair to Windy it was a relatively short ride for the afternoon, but he threw some crazy climbs at us.  I for one had to dig deep, get into my zone, and pound away to keep the momentum up – mainly as my bike was not geared for such climbs.  Then there was the ‘baby skulls’ climb – large, wet, slippery cobbles on a climb that would have been a challenge with out them. Only the instructor, Windy, made the climb. Just a bit of showing us who’s boss I think… With day one over, we were set some homework. To plan the route and guidance notes for the following day, where we would take it in turn to lead a section of the ride.  Luckily for us the bar was warm and inviting. A couple beers in and the mind was lubricated well enough to quickly get the route planned.

The following morning we woke, had breakfast, and headed to the meeting point for day 2 of our training.  Let’s revisit breakfast for a second.  The team decided to run a small fuelling experiment. Two of us went for the full-english fry up, whilst the other two of us took the continental (read healthy) route. The fry up was huge!! Two of everything. Certainly a lot of calories were piled in. The continental, complete with porridge, orange juice, and yoghurt was light on the stomach, but were there enough calories to carry us through the day? At the meeting point, we kitted up, readied the bikes and headed out on our longer ride of the weekend. This time The Canterbury Bike Project team were in control… mostly.  We took it in turns to lead the team through the Wye Valley along the route we had planned the previous night.  Surprisingly, all went well. We had opted not to use electronic GPS guidance and to rely on the lessons from the day before, and a good old fashioned paper map (although the paper was the special water proof kind).  Now, to give a little detail here, there is a number of procedures, and checklists that need a British Cycling ride leader needs to go through (albeit somewhat informal) before leading a group out on the ride. Then on the road, a continuous adaptive risk assessment is carried out by the ride leader to ensure the group is safe, the route remains suitable, and the return time remains achievable. Part of the planning of a route requires alternative routes to be planned in case the ride distance needs to be changed to suit the group. So to say all went well means everyone successfully led their section of the route and took on the guidance from Windy on how to improve the experience for our future customers. A good day, a good ride in awesome surroundings, and a good experience with Windy from WyeMtb.

In the van on the way back to Canterbury we were all a little drained from the long weekend, but we also excited and motivated to complete our training, which was to include a number of planned and led rides over the coming months, complete with planning and risk assessment evidenced in our logbook on which we were to be assessed.  We were so motivated that we managed to squeeze a quick stop at the pub when back in Canterbury, just so we could continue planning the dates and rides that we needed to complete…

A huge thank you and a mighty recommendation to the team at WyeMtb for taking us through the British Cycling Ride Leadership course.  Established in 2010 by two passionate mountain bikers, WyeMtb’s objectives are to educate, encourage, and enhance Mountain Bike participation in and around the Wye Valley, Forest of Deam, and South Wales, by offering expert mountain bike coaching and guided rides. They run some great courses in an enviable location. Definitely look them up…

So that was the training. What about the assessment? Keep an eye out for Part 2 coming soon where The Canterbury Bike Project team tackle examination day!

…as we are taking a short break. One week to be exact. Less teaching and repairs, but certainly more riding if we’re allowed.  Back on the 2nd November. In the meantime you can still contact us here or via the usual social media platforms.