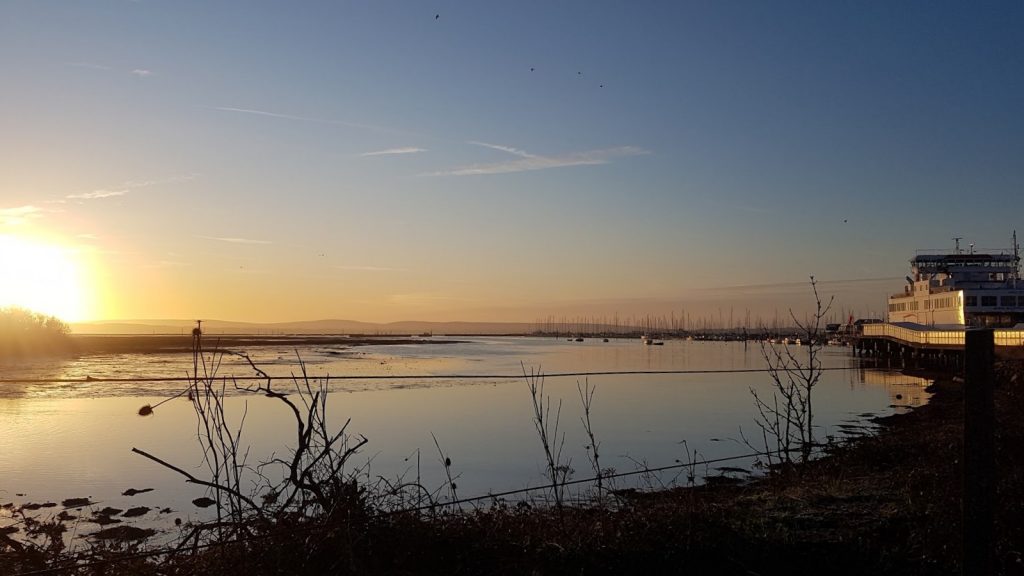 All the best adventures start with a sea passage. Granted these passages are usually more arduous than the Lymington to Yarmouth ferry on a crisp, bright Saturday morning in mid-January but this was our voyage and our adventure and we were brimming with excitement.

The assembled team of The Canterbury Bike Project were setting off on another of our training rides ahead of completing our British Cycling MTB Leadership Award in March. We each needed to submit a log-book of 11 two-hour and 4 four-hour rides in advance of assessment so it’s been a chance for us to spend time together and explore rides that we’ve had on our to-do lists for a while. For me, it was an opportunity to explore my childhood playground and so I spent many happy hours plotting a route that took us to some of my favourite bits and gave a real flavour of the West end of the Island. Will, Matt, Steve, Mike and me – The Canterbury Bike Project Team

Known as one of the most expensive stretches of water in the world, we abandoned the van in the car park and embarked by foot on to the ferry and stowed the bikes before going up to the lounge to drink coffee and discuss Steve’s new adventure-bike frame that he planed to collect from The Woods Cyclery in Lyndhurst on the way home. That frame collection became a regular refrain throughout the ride and I swear it got Steve up more than one steep hill! Plot the route digitally. Upload to the Garmin, and a printed copy as a backup.

During our training with Wye MTB it was drilled into us that a successful guided ride is one that is fun and flows, which means that even if the leader hasn’t ridden the route previously, they should know the key points and not constantly be referring to a map or GPS. Although this was my ride, the route wasn’t known to me I knew that my favourite ‘Tulip’ routing tool was going to be critical to maintaining the flow of the ride. A Tulip is a series of squares that give you the essential points of the route such as turns, waymarks and distances in between. I find I get fidgety making them as they require lots of concentration to break down a long ride into bite-size chunks, but they’re so easy to follow once you’re underway.

Before the ride there had been much debate over which bikes to bring to the Island. It wasn’t clear from the maps exactly what the terrain would be and we’d finally ended up with a mix of hardtails and short travel full suspension bikes. The first leg of the journey – The Freshwater Way – which leads over to the Southern coast of the Island proved that we’d made the right choice. As fun as gravel bikes are they’d have been uncomfortable on the broken path. Feeling righteous in our decisions, we soaked up the stunning river valley that we were cycling along. To me this lowland marsh, mud and brackish river is synonymous with home and I lapped up every minute of the journey.

Stopping to ‘relocate’ on the map as we turned left onto the road we felt that instinctive desire to follow a different route and simply explore, but we reminded ourselves that this was time to practice guiding and so we had to stick to the plan. The next stage of the journey was one of the first places we lost the route but the benefit of this being a training ride meant that we were able to collectively resolve the issue and get back on track. I was cross with my mistake but determined to learn from it when I got home. Much like the first ‘Stage’ when I’m racing, I felt nervy and unable to fully focus through this first part of the ride. By the time we’d reached the Island’s Southern coast and saw the Tennyson Trail climbing up the ridge to our left, I began to relax into my role as leader. Almost immediately I began relying on the tulip instead of my Garmin. The map on the Garmin was clear and it beaped reassuringly each time we passed a logged way point, but having not taken time to get used to it, the map wasn’t centralised on our location and I was struggling to find grid references on it. The Western Island stretching away to the Needles behind us

The climb up the grass and chalk path of the Tennyson Trail was idyllic. With the chalk cliffs in the distance behind us, Lymington and the Beaulieu foreshore laid out to our left, the Channel sat to our right. We literally were cycling along the spine of the Island. We passed a few walkers and golfers (the Trail cuts through a golf course) and were overtaken by a couple of other MTB riders, heading on to the single-track hidden in the woods ahead. None of that bothered us as we chatted about the Project and planned future bike-packing expeditions – our plans getting ever bigger with the increasing altitude. Before long we conquered the first climb and dropped quickly down to a country lane before regaining all the lost altitude on the next hill. It made me realise how fit I am currently with training for Kingdom but also how as a Guide you are likely to be considerably fitter than many of your clients and you need to be aware of their pace and comfort as you ride. The enjoyment and reward you get from guiding is subtly different to the enjoyment of type 2 fun with your mates and with this distinction in mind it becomes easier to be conscious of the other riders in the group and their needs. A glorious day in January

We’d planned the ride for late January, but we need not have worried about the weather – it was glorious! No wind, blue skies, strong sun – the Island was revealing itself in all it’s glory as we took our first stop about a third of the way into the ride. Basking in bright sunlight, we munched on assorted snacks before re-booting the new bike conversations to power us up the rest of the hill. Soon we were skirting along the edge of Brighstone Down, heading towards the reservoir that marked our turn North and our return to the Solent side of the island.  One of the best bits of route planning for me is the chance to pour over Ordnance Survey maps, getting lost in the history and culture of a place. Place names, old industrial works, trigonometry points, lookouts and public toilets are laid out for all to see.  I still find it amazing how many disused pits and quarries make up our countryside, while remnants of the World Wars are often left off the maps.

The Tulip I’d created used a mixture of geographical markers, distances and grid references to help keep us on the bridleways and trails that were taking us across the Island.  Not having a chance to ride the route in advance meant that I doubted myself at one turning point, marked simply with a grid reference.  A combination of apps and maps enabled us to find a suitable alternative through the woods and we were racing down the side of a field in no time, like grown up members of the Famous Five, out on an adventure. Inside I was logging the experience, determined to use it to make my preparation better next time, reminding myself that this is what practise is all about.

We followed the bridleway into a farmyard in the middle of the Island. Feeling like intruders we quickly made our way through and out the other side climbing up a root-strewn gully that was meant to be a track. Bringing out our competitive sides we tried valiantly to keep going before admitting defeat and pushing the bikes to the next field junction.

We followed the perimeter of this field to the top of the next hill and spotted the Island’s TV mast ahead, giving us a chance to pinpoint our exact location on the map. The remainder of this section of ride was surreal as we followed a rocky stream bed through land that had recently hosted shoots by the look of the buckets of spent shells along the track. Keeping an ear out for gunshots we were relieved to make it to Ashengrove in one piece.

The final third of the journey took us on a mix of lanes and National Cycle Network through Shalfleet and Newtown, the creeks where I spent most of my childhood. Honestly, I don’t think I’m happier than when I’m in this part of the Island. This is where my sense of adventure and love of freedom was cultivated and I am so lucky to still have it in my life, anchoring me and providing solace when thing get tough.

After several hours of riding through woodland and fields, we were grateful of a bit of fast tarmac pedalling to bring us back to Yarmouth and the Ferry. As we joined the main road by the groynes just outside Yarmouth we spotted the Ferry at it’s berth. With one ferry an hour and Steve desperate to get to Lyndhurst before The Woods Cyclery shut, we pedaled all out to catch this boat. Arriving at the last minute we scooted on and parked our bikes before heading up to the lounge to eat chocolate, drink tea and dissect the ride. Love the things you find on the Island – Dino in the garden!

Steve made it to the shop in time and collected his beautiful Bombrack Beyond + frame. We all agreed that the Island is one of our favourite places to ride and we all passed our practical MTB Level 2 Leadership Award in March! Thank you to The Canterbury Bike Project for investing in me and Wye MTB for leading us through the training and assessment. I still love Tulips for guiding rides but have made good friends with my Garmin eTrex too.  I can’t wait to get more guiding and training under my belt once lockdown is over.